App marketers face a number of unique challenges as it pertains to marketing a digital product. The first big hurdle they must overcome is acquiring the initial download. Downloading an app takes a certain level of commitment from users. Unlike web pages, apps can’t be visited, evaluated, and left in a matter of seconds. They take time to download and also have a greater sense of permanence because they live on a user’s device.

The second major challenge an app marketer must tackle is re-engaging the users who have downloaded their app. The good news is that the pain points and friction associated with acquiring the initial download are decreasing as download speeds and storage space increases. However, as that hurdle gets smaller, re-engagement gets harder. In the US, users have over 32 apps on average, and often times people download multiple apps that serve the same purpose.

This is what makes re-engagement and re-targeting increasingly more important. As more and more apps are downloaded every day, improving post-download engagement is becoming more challenging and more expensive. Here are a few ways you can organically drive re-engagement with your app.

One of the biggest factors that can help re-engagement with you app is just reminding users you’re there. It’s not uncommon for a user to download an app, open it once, and then forget that they have it. Studies have shown that over 80% of apps are only opened once after the initial download. Having an active social presence is a great way to remind people to use your app. Of course, increasing your social engagement and clout is much easier said than done, but social platforms provide a great place to be creative and find unique ways to connect with your target market.

Recently, I’ve seen some great examples of large social campaigns that not only help drive re-engagement, but also increase overall social presence. One example of this was a campaign Starbucks started in December of 2013. It allowed users to buy their friends a coffee via Twitter by connecting their accounts to the Starbucks app and then tweeting the handle of their friend and ‘@tweetacoffee.’ This is a perfect example of using social to help your mobile app. It forces users to interact with your app, but it also provides the incentive for them to do so. 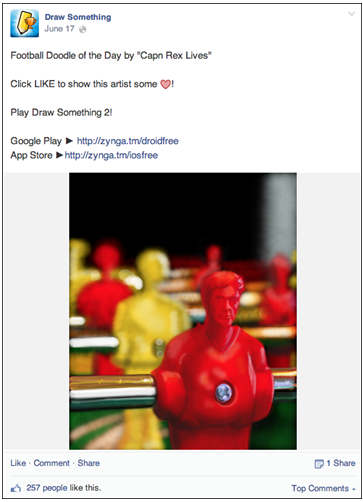 You don’t always have to give discounts and free products to deliver value to your social followers. DrawSomething, the popular game by Zynga, connects with their users by sharing different drawings made on their app. It provides their users with incentive to follow and share with their social accounts in the hopes of getting their drawing featured. But just as importantly, because most of the drawings are extremely impressive, it provides an ‘awe’ factor and incentive for non-die hard fans to follow the account. Their followers are constantly reminded of the app which increases the chances that they will play.

Any app can find a specific niche to target via social channels. It’s just a matter of understanding your users and finding creative ways to connect with them. Once you’ve done this, you can then use social platforms to run campaigns and increase engagement with your app.

App indexing is another great way to organically drive engagement. App indexing is a recent addition to Android which allows you to leverage your SEO to help your app. If a user already has your app installed, you can create deep-links to specific pages within your app when someone uses a mobile device to conduct a Google search. As you can see in the example below, when someone searches for ‘triple chocolate therapy recipe’ on Google, the allthecooks webpage shows up first. However, they also have a deep-link to that specific recipe within their app, increasing the chances that the user will open the recipe in their app rather than the webpage. 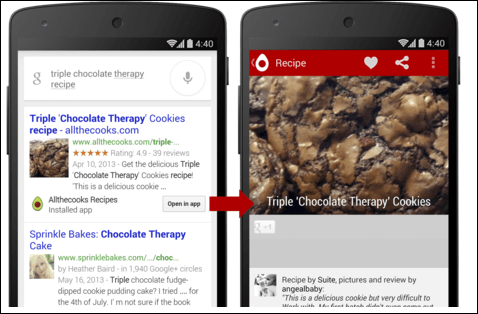 This is extremely valuable for a number of reasons. First, it targets users whose first instinct was to go to Google, not an app, to find recipes. When Google redirects that user to the app, it encourages that behavior, which increases the chances that next time they search for a recipe, they will go to the app. This helps improve long-term engagement. Second, it provides a competitive advantage over similar apps installed on a user’s phone. If, for example, this person had multiple cooking and recipe apps on their phone, Google would direct them specifically to allthecooks, again, increasing the chances that they will visit that app later (over any other recipe apps they might have installed).

This is still a relatively new feature, so it is still somewhat limited. However, it is the start of a move towards pushing app engagement. The best part is that it allows you to take advantage of the efforts you’re already putting into SEO, and it doesn’t cost you anything.

Push notifications are another great way to remind the user that your app is there and ready to be used. If done right, they can be very effective. But there’s a fine line between gently reminding users about your app and annoying them to the point where they delete it.

There are a few very important things to take into consideration when utilizing push notifications. First, always provide a clear and easily accessible way to opt in or out of notifications. If you’ve downloaded an app recently, you might have noticed that after opening the app for the first time, it will ask for your permission to send push notifications. This is a great practice to implement because it allows the user to opt in or out right away and sets proper expectations. Also, don’t overdo notifications. No one likes the app that is constantly bugging them and sending too many alerts. Worst case, that can lead to the user deleting your app, best case, they just turn off notifications which then will make it harder to engage them in the future.

Lastly, make sure the notifications add value. This not only increases the chances that users will actually act on the alert, but it also increases the perceived value of your brand and product.

Long-term retention, on average, has shown to be 92 percent higher each month for users who opted into push notifications. It’s no secret that they can provide immense value, but make sure to brush up on some more best practices before implementing them. 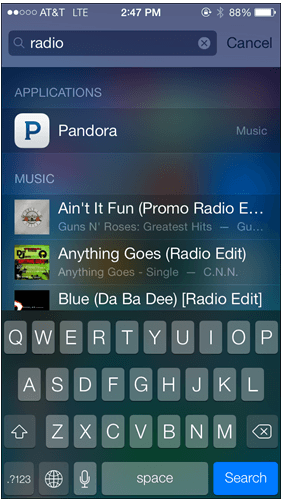 Although not nearly as effective as Google’s App Indexing, the Spotlight feature from Apple provides opportunities to re-engage users as well. With so many different pages and folders available on the iPhone, it’s easy for apps to get lost in the dark corners of a device. Spotlight allows people to search for specific things within their phone. Although often used for finding contacts or songs, apps can also utilize the function as well to, again, remind users that the app is there. The most important thing is to take advantage of your title. We expect Spotlight to be improved for iOS8, but it currently just scrapes apps for keywords in the title, so make sure to include targeted terms that are highly relevant to the space your app is in. That way someone using Spotlight doesn’t have to search specifically for your app, but rather, can search for a general term like ‘radio,’ which is highly relevant.

These are a few of the ways you can organically drive re-engagement with your app. Of course, the most important thing is to create a great product so users naturally want to come back over time. However, implementing some or all of these measures along the way can help increase the chances of long-term success for your app.

UP NEXT -> WWDC & Google I/O – What Marketers Need To Know

The Top 3 Examples of Successful Subscription Apps (and Why!)