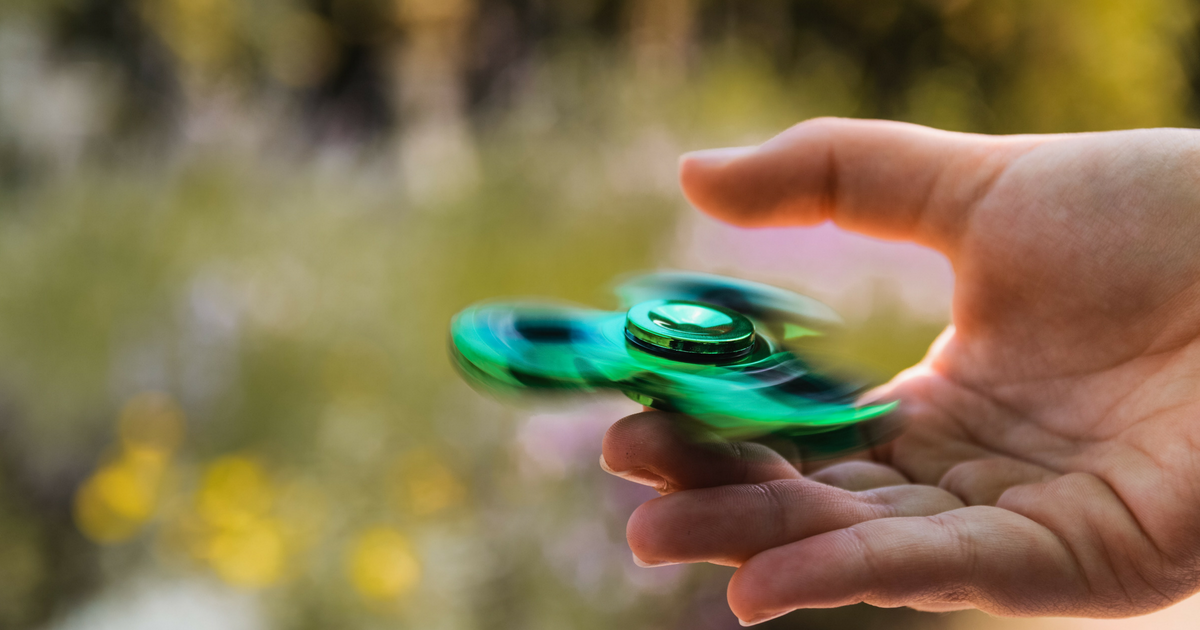 For the past few months, fidget spinners have taken the world by storm. The innocuous toys were originally invented in the 90s as a tool for stress release, but they recently came into vogue as a general purpose distraction. Rather than helping children with ADHD minimize fidgeting and improve focus, the toy is often used to decrease focus, both in the classroom and out. Let’s face it: they’re hard to resist.

It shouldn’t come as a surprise that the fidget spinner craze is hitting the mobile world as well. On both iOS and Android, app developers are hard at work finding new ways to gamify the toy.

So far, Ketchapp’s take seems to be the market leader. The game tops the free app charts on both major platforms while boasting a 4+ star average. How did the developers turn their app into such a hit? We’re going to break down Fidget Spinner’s game and app engagement strategy to find out.

The game opens with a picture of the titular toy. The instructions are clear: Swipe to spin. Each spin grants you coins, which are used to buy upgrades, which help you spin even more. What happens when you spin? 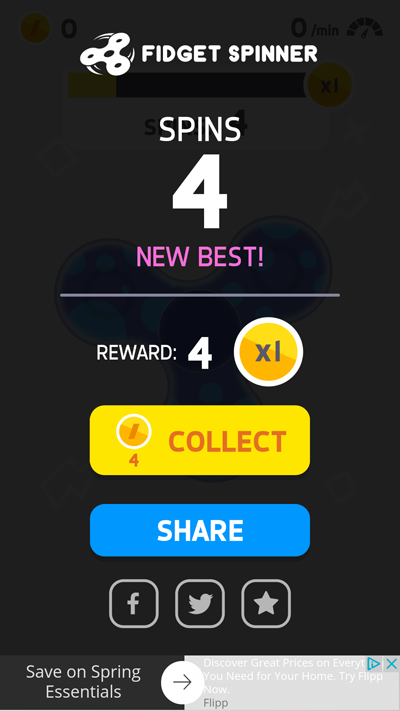 Once the spinner grinds to a halt, you’re greeted with a splash screen displaying the results. There are a few things to note here.

The share button is especially noteworthy since it occasionally impacts gameplay, as you’ll see below. 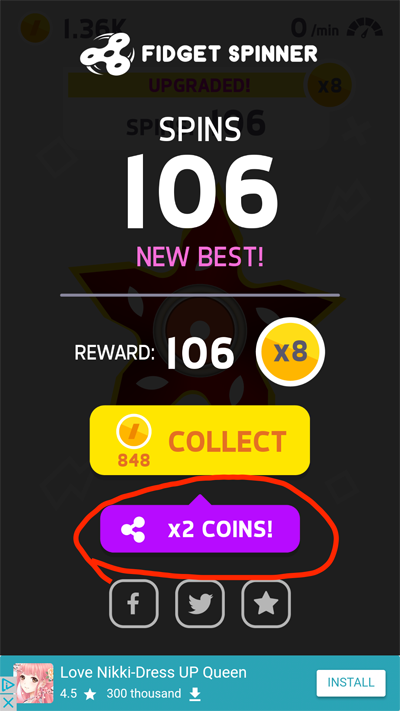 After playing a few rounds without clicking the share button, the app offered a 2x coin bonus for sharing. I hardly noticed the button before, but the multiplier and different color caught my eye.

Fidget Spinner picks the perfect time to offer this award. It happened within the first 10 or 20 minutes of play (likely a single play session), which gives the player time to level up and earn more coins per spin. A 2x bonus is much more appealing when applied to a base of 848 coins rather than four. Not to mention, you’ll want a sizable score to show off to your friends — no use in sharing your first spin of the day.

In another sense, waiting before incentivizing the share helps earn user trust. It’s a bit like the strategy behind our Push Pre-Permissions feature. Wait until users get a feel for your app before making requests. You’ll enjoy a better response rate, and you’re more likely to delight than annoy. 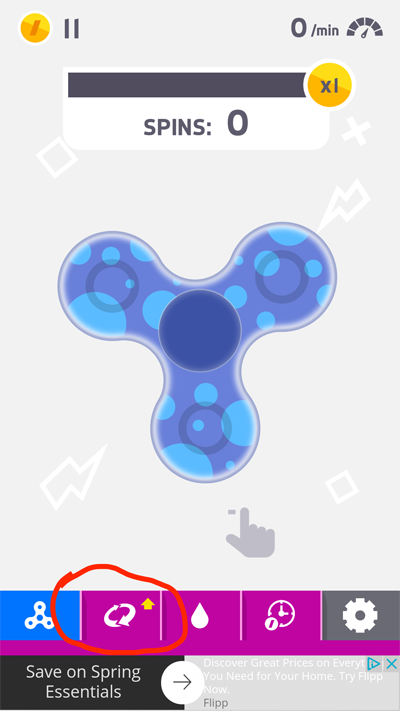 Upon returning to the home screen, you’ll notice little yellow arrows above the tabs at the bottom. These notifications appear when you collect enough coins to upgrade an ability. Expanding the menu reveals a few more of the game’s features, as shown below. 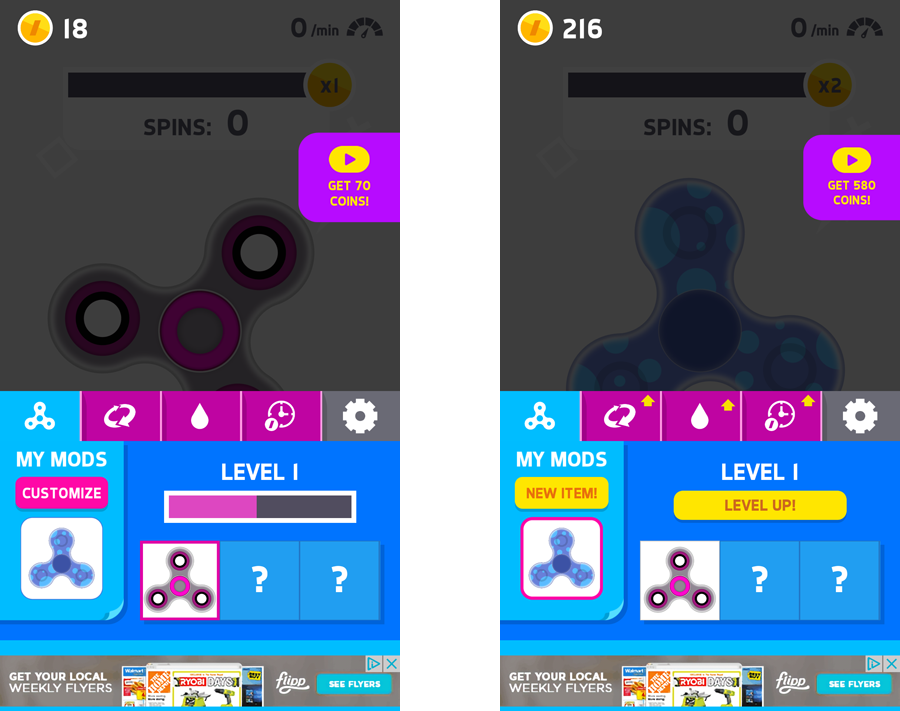 Fidget Spinner offers several different spinner designs which unlock as you play. Over time, you’ll also unlock stickers to customize your spinner. Both types of unlockables are called out with bright yellow buttons, as shown on the right. This teases the feeling of reward while drawing attention to one of the game’s features.

Last but not least: The customize menu. Stickers are unlocked when specific conditions are met, like reaching a particular spin speed or completing a set number of spins in total. In case these conditions aren’t clear, Fidget Spinner onboards the user with an in-app message for every unlock. 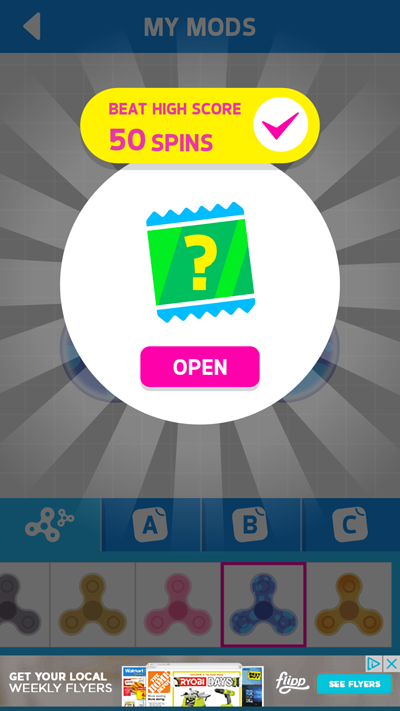 Fidget Spinner boasts an intuitive onboarding flow, but that’s no surprise given that the game itself is intuitive. Retention is likely to be a bigger challenge. In real life, people play with fidget spinners on a whim; it’s easy to leave one in a corner and forget about it for weeks. Just how addictive is this digital fidget spinner?

Fortunately, Ketchapp realized retention would be a problem. The game contains plenty of retention-driven features, which I’ll explore below. 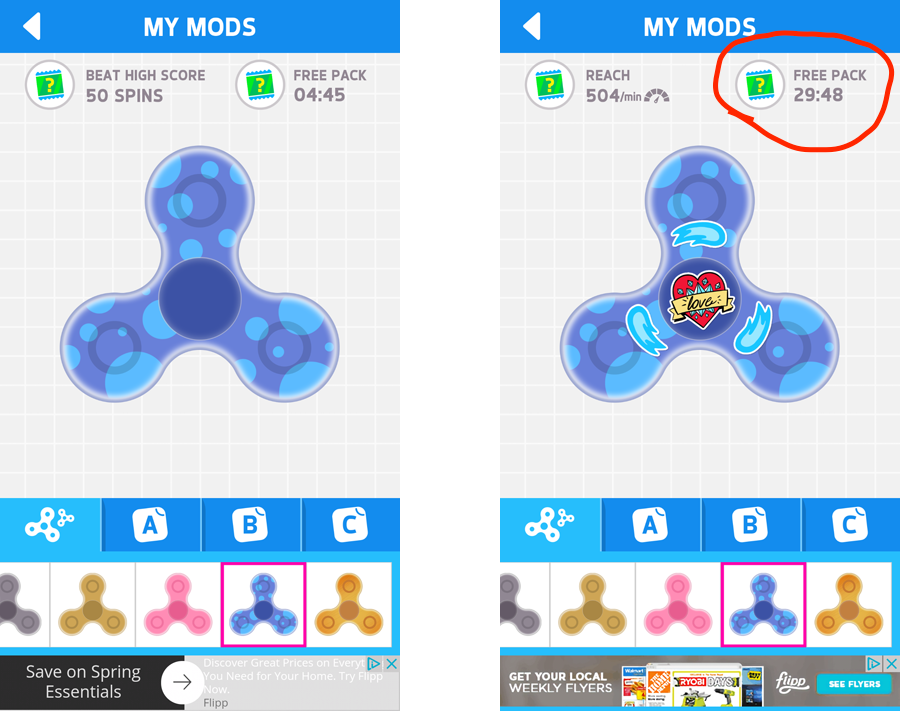 Here are two screencaps from the customization screen. As explained above, stickers are unlocked for hitting gameplay milestones — in this case, exceeding 50 spins in a single play or reaching a speed of 504 spins/minute.

But on the top-right, you’ll see that there’s another condition. Stickers are unlocked for free once you’ve played for long enough. The first free sticker unlocks after about seven minutes, which should be within your first app usage session (this can be confirmed through analytics). However, the second sticker doesn’t unlock for another half hour. This incentivizes users to either keep playing or (more likely) return later for a second session to collect their reward.

The heart and soul of Fidget Spinner’s retention strategy lies in the gameplay itself. Like Cookie Clicker and similar “idle” games, the player can’t actively do much to advance through each level. There’s a hard cap on how fast you can spin the spinner — the only way to improve is to buy upgrades.

[bctt tweet=”The heart and soul of Fidget Spinner’s retention strategy lies in the gameplay itself.” username=”leanplum”]

One way or the other, users will eventually grow tired of flicking their phone screens. Knowing this, the developers devised a few alternatives. 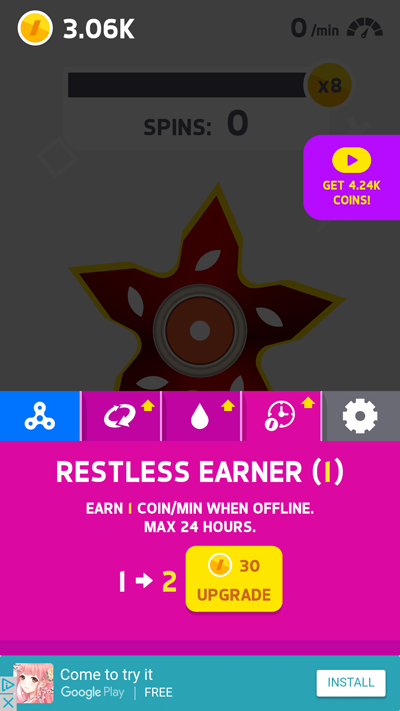 First, we have the idle earning upgrade. This feature gradually accumulates coins while the app is closed, to be collected at the next launch. This guarantees the player will be greeted with free coins every time they open the game, and it removes some tedium from the flicking process. It’s okay to play for five minutes and stop for the day, because you’ll earn coins in the background regardless.

Another core mechanic can be seen in the purple button in the top-right corner. This button lets users watch 30-second ads in exchange for coins. Note that the number of coins you earn from ads is disproportionately high: If a one-minute spinning round earns 5,000 coins, an ad might provide 25,000 coins.

Unlike many mobile games, Fidget Spinner doesn’t limit play session length with artificial restrictions. Normally, games provide a limited number of lives or tries per play session. Players can then either wait a certain length of time to regain more lives, or spend money to purchase lives on the spot. This technique is used to prevent binge sessions and force retention by splitting play time across multiple days. Casual users will keep returning to the app to play for free, while serious users will spend money to progress more quickly through the game.

Instead of profiting from binge sessions, Fidget Spinner appears to monetize solely through ads. The ad-viewing option is effectively a shortcut for earning coins. As the player’s coin growth curve slows relative to the amount needed to level up, it becomes increasingly tempting to harvest coins through ads, earning revenue for the publisher in the process.

That said, a game that revolves around watching ads would not enjoy a good retention rate. The bonus for watching ads only increases when players achieve a new personal high score or reach a new coin multiplier. Even if you haven’t leveled up enough to hit the multiplier, you’re encouraged to spin after every upgrade to improve your high score and increase the efficiency of viewing ads.

With these mechanics, players slip into a comfortable workflow of watching ads to buy upgrades and flicking the spinner after each purchase. Even when you stop for the day, the app earns coins in the background, so you’ll be able to buy an upgrade ad-free when you return. The gameplay successfully brings users back to the app without enforcing play session limits. 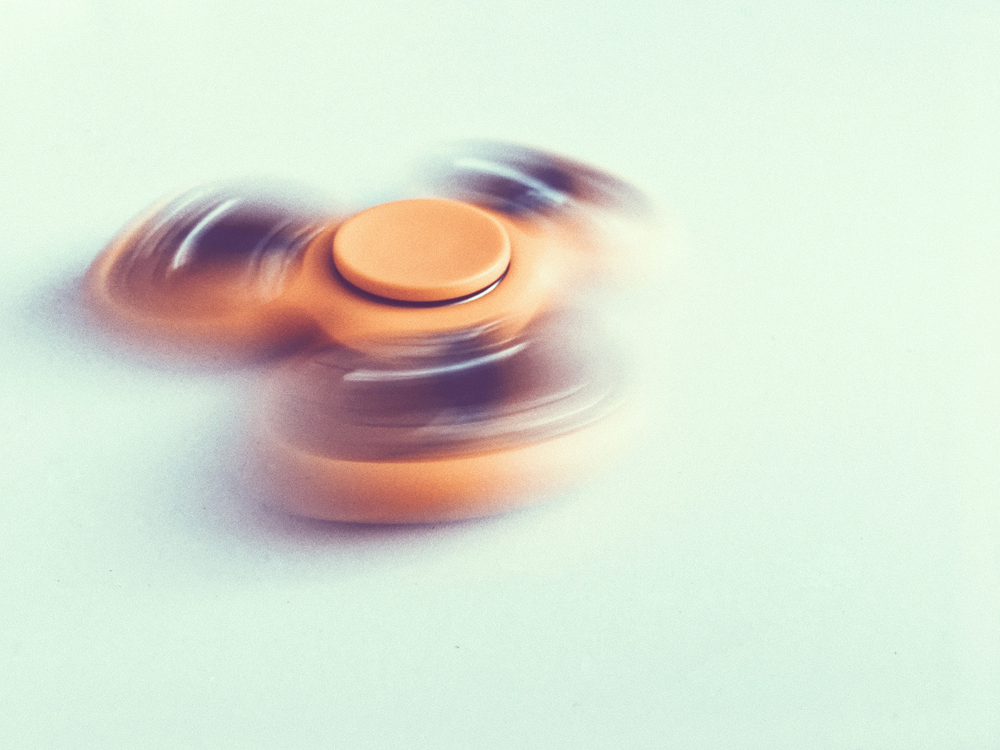 Like all trends, there’s more to fidget spinners than meets the eye. There’s certainly more to Ketchapp’s Fidget Spinner than a casual browser might think. With an easy-to-understand UI and cleverly monetized gameplay, Fidget Spinner nails both onboarding and retention. Even when the trend fades, I wouldn’t be surprised if the app retains a few loyal users who just have to get to the end.