The Netflixing of the world doesn’t necessarily keep Christy up all night. But a seamless news experience — from desktop to mobile to OTT — is ever-present on her mind. Especially when it comes to savvy streamers and news omnivores, two core audiences for the news giant’s streaming service, CBSN.

Speaking with Leanplum SVP of Global Marketing Joyce Solano recently at Mobile Ventures Summit in New York, Christy dished on the convergence of mobile platforms, the connected home, how her news organization looks at content and personalization, and why the legacy media giant continues to dig deep to curate the news for a new generation of consumers.

“Whether it’s Apple TV or Roku, across every platform, people expect their news streaming service to behave like Netflix,” Christy says. “Fast, glitch free. For the mobile experience, people want it to have the same quality of service as TV or connected devices.”

Such cross-platform seamlessness is a challenge, but required as more and more consumers — those so-called savvy streamers — segue during the day from OTT (morning) to mobile (commute) to desktop (work) back to OTT (evening).

For CBSN, this digital dance normally sees OTT devices consume 50 percent of the daily traffic, with spikes morning and evening, desktop 30 percent (mostly during the day), and mobile 20 percent (primarily during commute hours).

Great content should make us engage, regardless of platform.

“Live news was the original binge,” says Christy. “We don’t have to know what you want next, we know you want the most important news.”

And that means mobile.

“So much of what we do is live; if you’re a news omnivore, you subscribe to mobile,” says Christy, a former journalist who started her career with the Associated Press. “When news breaks, e.g., hurricanes in Miami, or Michael Cohen pleading guilty, our mobile usage spikes. Users want that live experience, to see what his lawyer is saying, to see what our legal experts are saying…”

The May Royal wedding of Prince Harry and Meghan Markle was another startling reminder about the power of live.

“We did a lot of prepping, running promos on platforms,” Christy recalls. “We thought people would wake up for our coverage, go into the living room, make tea and scones — have a party — and watch the wedding on their Roku or Amazon. Surprisingly, what happened was people got a mobile push notification at 4 a.m., rolled over in bed, started watching the wedding on their mobile and never left.”

[bctt tweet=”“Conventional wisdom says people usually go the biggest screen for breaking news. But they actually used the screen that was closest to them.”” username=”leanplum”]

“Whenever we put CBSN onto a platform, it grows fast, because there aren’t a lot of competing services, and the ones that are out there are not live nor as trusted in their brands.”

But voice has a way to go as a content enabler, despite playing a “big role in the future of news.”

“While voice is ideal for scripted TV — ‘Alexa, search for The Big Bang Theory’ — there isn’t an effective vision yet for a query like, ‘What’s the latest news?’”

Simply being shunted off to a preferred platform partner qualifies as a “lame response.”

When asked about the effect of personalization on digital news delivery, Christy minces no words.

“We are bringing you the world, that’s what we stand for, and we’re going to curate that.” 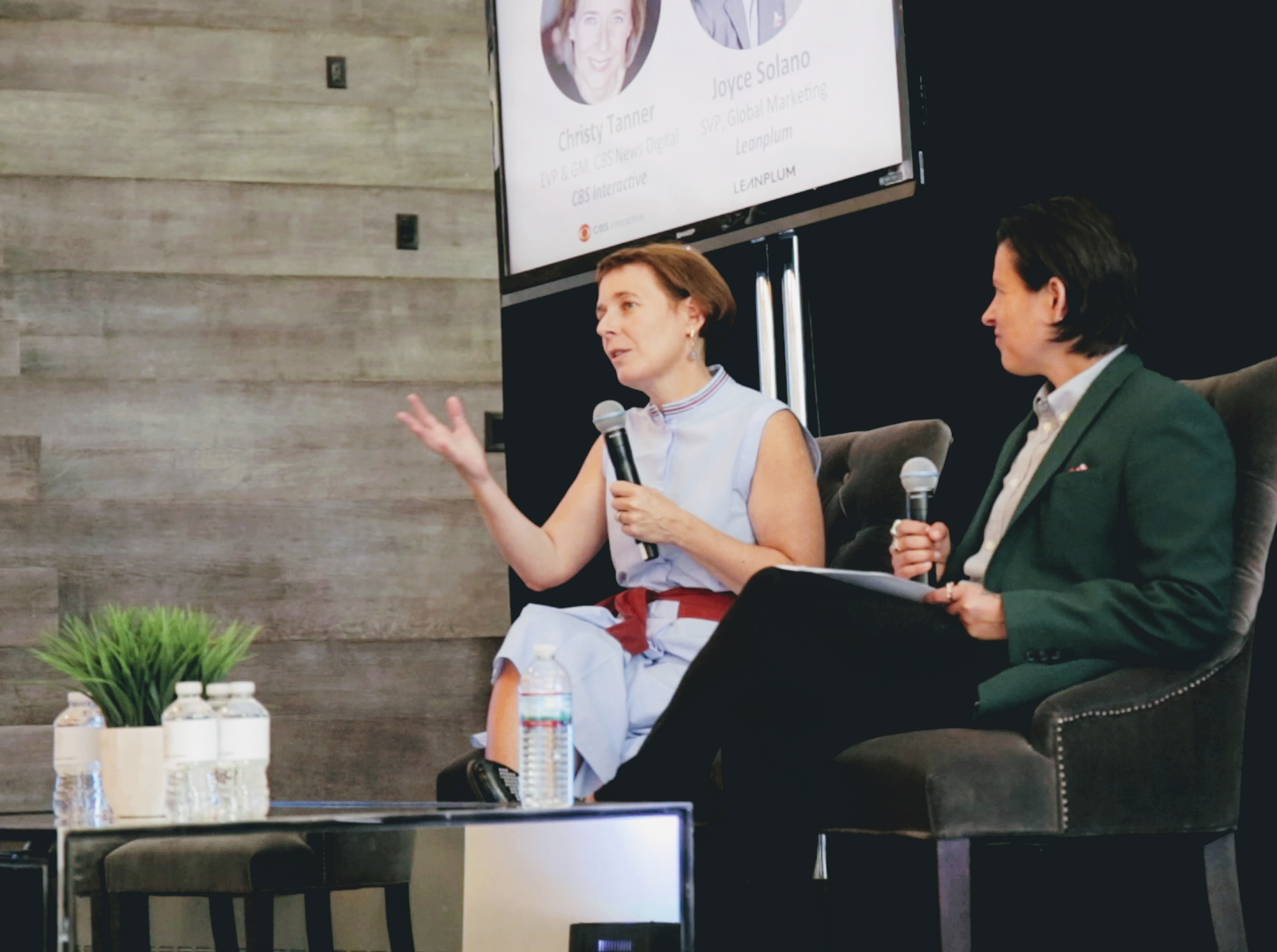 When it comes to tech vision, is it more of a marketing stack exercise or managing the user experience?

Definitely the latter, Christy says, citing a recent breaking news moment. “When [former Trump campaign manager] Paul Manafort was found guilty, my phone blew up with mobile notifications, but all the same — I even got two from CBS. We need to be more useful, [send] less noise. We also believe we have a moral and ethical vision, a responsibility to society, to build a better platform.”

How does media use notifications to do a better job of delivering the news?

It may start with those who build the tech.

“Many engineers simply aren’t consumers of news,” says Christy. “So they can’t create a good user experience. That’s why you see so many experiences for scripted TV, because everybody consumes it. ‘If you like Big Bang Theory, you’ll like MacGyver…’ We need engineers who understand and consume news themselves.”

The Future of Notifications, News & OTT

“I’m excited to being able to connect mobile notifications with the OTT ecosystem,” Christy says. “We want to convert users coming in from mobile search to OTT.”

“Video will be ubiquitous, programming straight to your brain,” Christy muses. “In the news space, as curators of editorial, we will one day move you thru simultaneous news events. Today, we can’t truly ‘split screen’ to give someone the right choices, the ability to switch between three things — keep tabs on one, watch another, replay the third thing.”

What about retention when an audience has so many channels to consume news?

[bctt tweet=”“The way we are going to win the war for attention is to do the reporting, break news, share stories no one else is telling, and do the investigative work that can’t be ripped off — no matter the distribution platform.”” username=”leanplum”]

After the fireside chat, Leanplum managed to corral Christy backstage at Mobile Ventures Summit for more media insight, including mobile as a point of entry to other platforms, how mobile will play with connected homes, and device convergence. Take a look.

How to Increase Multi-Channel App Engagement During COVID-19

Quarantine or a Digital Leap Into the Future?