The What, How & Why of Blockchain Marketing

Wait, what? Blockchain can be used for mobile marketing? Yes. Let’s take a look at how it can be applied. But first, a little background on this emerging technology.

How Did We Get to Blockchain?

It all started with a cryptocurrency known as Bitcoin, though now more than 2,100 others follow in its footsteps. Yes, Bitcoin is that digital currency that only 37 humans understand (my colleague John Segal spent an hour explaining it to me), but everyone in the world wishes they invested in.

And Bitcoin was just the beginning. Blockchain as a whole can be adapted to secure and advance our entire concept of technology, including the ways we interact with it.

Where Are We Going With Blockchain?

Think about all of the actions and transactions you complete on your mobile device. Think of autonomous vehicles that are hitting the streets as you read. Think of smart cities that are being planned.

Blockchains will be intricately woven into all of these and more. They can verify online data, enabling us to manage companies that are run entirely by algorithms. This means safer, smarter cities and self-driving cars, as well as improved identity protection.

Rewind. What Even Is Blockchain?!

Blockchain technology is a system where records are stored, facts are verified, and security is guaranteed. A list of all transactions carried out within the network is stored on computers around the world, hosted by contributing users. This list is known as the blockchain.

When a new transaction takes place between network users, it is added to a list where the users involved are identified only by numerical hashes. When the number of transactions in that list reaches a certain length, that list becomes a block and is added to the overall database — the blockchain.

At that point, no transaction in the block may be altered, as a new block immediately begins ‘on top of’ its predecessor. Think of stacked boxes. It’s impossible to access the ones at the bottom of a stack. Information stored in the blockchain is essentially immutable, pseudonymous, and secure.

At every point within this system, transactions are verified and secured with strong encryption, and the decentralized nature of storage prohibits anyone from falsifying transactions — any disagreement between computers on the veracity of a block is resolved based on the source of truth shared by the greatest number of nodes within the network.

Does Blockchain Impact Other Industries?

Since everything is recorded, verified, stored, and visible by everyone in the blockchain ledger, previously impossible business models can now be achieved.

Blockchain is already being adapted for use outside of cryptocurrency. The broader financial sector, healthcare, automotive, and insurance industries have already begun to experiment with blockchain’s trustworthy and traceable financial transactions, as well as other applications.

The entire nation of Estonia has adapted blockchain technology, allowing for unprecedented integrations across a multitude of different databases, and for an entirely new concept of citizenship unburdened by geographical distinctions.

Marketing and advertising industries are also seeing some traction with blockchain. The most prevalent use cases are rooted in improving transparency in ad buys and potentially removing the middleman. In advertising alone, blockchain has the potential to disrupt everything from how ads are purchased, tracked, and measured to the way they are valued.

Tell Me About Marketing Blockchains.

Imagine a world where you, a customer of your favorite brands, have complete control over the data you share with those brands. A world where you determine which information is shared in a user profile, and when brands can leverage this information to market to you.

We’re currently at the information gathering phase of this marketing and data utopia. Although advanced blockchain applications like the ones mentioned have yet to be implemented, I’m envisioning a future where these profiles vastly improve interactions between brands and devices.

Adtech and martech blockchain startups are also sprouting up across the entire landscape. Most are in the social and advertising, but there are several in marketing data, content, and commerce. Although the industry is largely in the proof-of-concept phase, the market’s explosive growth is surely something to note. In the six months from fall 2017 to winter 2018, the number of tracked projects grew a whopping 400 percent. 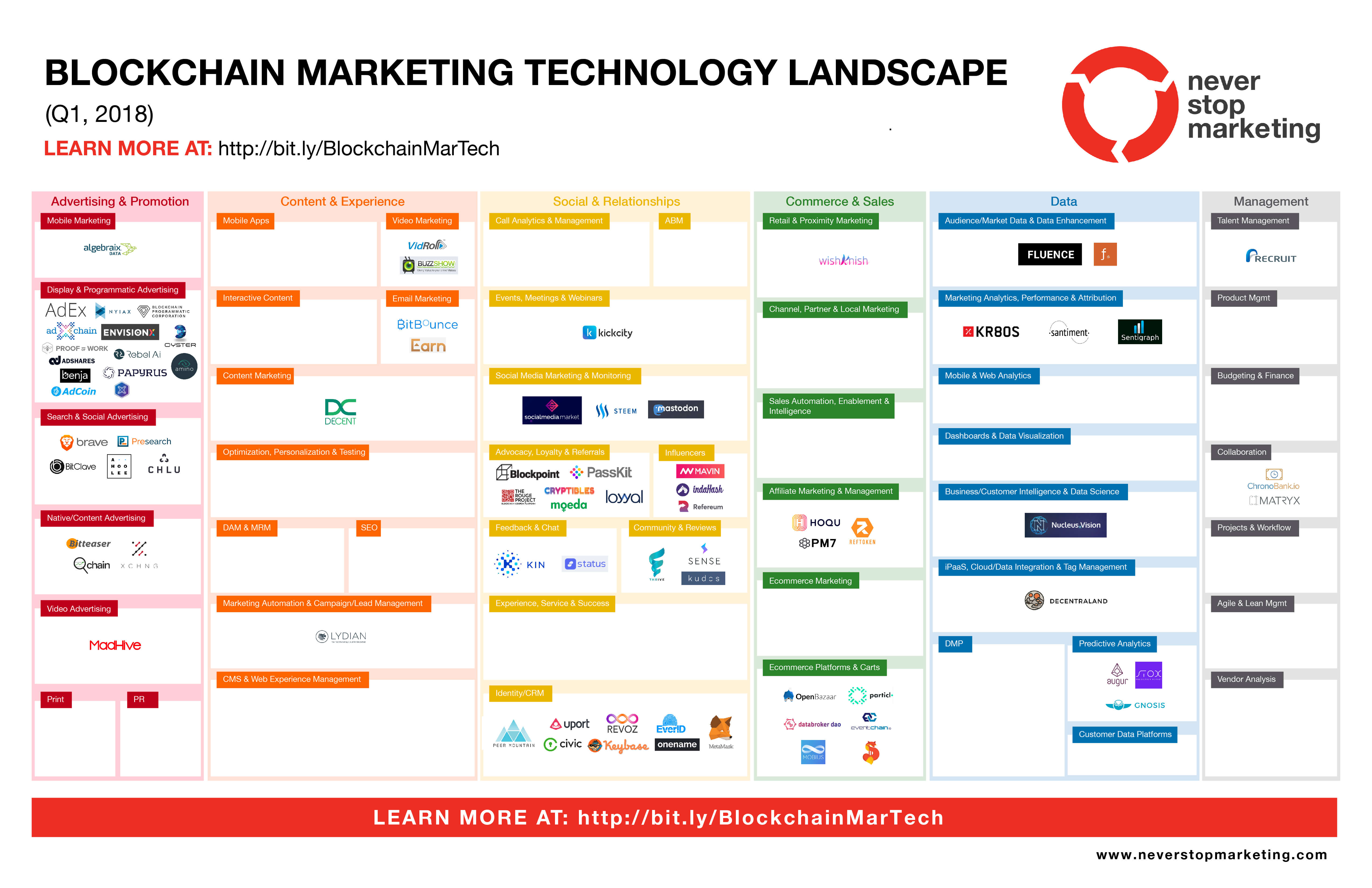 How Else Is Blockchain Used in Marketing?

Blockchain is also opening the door to new business models within marketing. There are several database businesses popping up that request user data in exchange for crypto compensation (this is not legal or financial advice, but you can sell your data to Datum 🤔). Depending on the contract stipulations, these companies are then able to leverage that information to improve communications with consumers — given the consumer opts-in to being contacted.

If you think like me, this may sound your Cambridge Analytica alarms. But in fact, blockchain does the exact opposite and raises the bar for consumer data protection. Since the ledgers and log files are distributed and verified across a network of servers, in theory, users are given full visibility and control over their data.

What Are the Benefits of Blockchain Marketing?

With verified profiles based on trusted data, brands can significantly improve their marketing programs. Today’s user profiles are siloed in specific brand databases like Facebook and Google, but marketing can be much more personal and relevant if it’s coordinated across multiple sources.

Although the marketing proverb “right message, right person, right time” isn’t news to any of you, blockchain is the only foreseeable way for this to be true. And it adds a much needed layer of consent. Blockchain-enabled marketing allows the consumer to elect when, where, and how brands can connect with them.

The benefits don’t end at consent. Consumers can also expect several other benefits that span savings and security. Since advertising will be markedly more efficient and less costly to brands, people will actually save money on products. Since data securities and transparencies across profiles, advertising, and transactions will be significantly enhanced, digital fraud will effectively disappear. 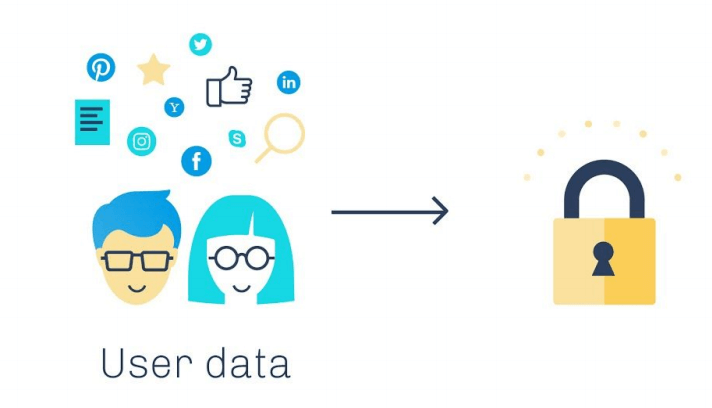 Why Are We Not There Yet?

Rome wasn’t built in a day, but blockchain is making daily strides. Even though the technology  is still in its infancy, companies are currently using it in proof of concepts (for the use cases I mentioned earlier).

There are still limitations with respect to adoption. Limitation one, blockchain hasn’t reached the critical mass to yield a significant impact. Second, adoption impacts scalability and speed, in the sense that less users means less opportunities to fine-tune the technology.

Scalability also opens the floodgates to a plethora (yes, I used it) of data processing issues. A distributed ledger of transactions requires far more network connections than a more traditional network.

Take a bank and six users, for example. In a traditional network, each user processes a single transaction with the bank, while the bank itself processes six. Therefore, the total number of connections is restricted purely by the ability of the bank to process as many transactions as it has users.

Additionally, connection speed has a far greater impact. If one of the users has a terrible connection, they are not only  slowing down their own transactions, but also the transactions of every user on the network. Network latency can dramatically inhibit processing speed, though many are already discussing fixes.

And although X-ray vision has made everyone’s superpower list, full transparency raises a lot of concerns for general privacy. In theory, consumers have complete control over what data is shared, but transactional patterns may be deduced since the ledgers are public.

How Will We Get There?

We’re still decades away from widespread adoption of blockchain technology — and several decades from widespread blockchain marketing adoption. And this could be compounded by the speed, or lack thereof, of the development and implementation of government standards. With that said, I’m still a diehard advocate of testing things out.

The natural next step for marketing organizations is to position their company for a blockchain adoption wave. Click To Tweet

The natural next step for marketing organizations is to position their company for a blockchain adoption wave. This means investing in distributed capabilities — discovering ways to enable a higher degree of decentralization, transparency, privacy, and transactional throughput — so that companies can fully support blockchain use cases. This also means disseminating that information and educating both the organization and its customers — just like I’m doing here.

Leanplum is the mobile marketing platform built for engagement. We help brands like Tinder, Grab, Tesco, and Zynga orchestrate multi-channel campaigns — from messaging to the in-app experience — all from a single, integrated platform. Schedule your personalized demo here.